We’re introducing you to people who are part of the Betterwrite world. Welcome to S.F. CLAYMORE.

First of all, can you explain your connection with Betterwrite?
I got in touch with Betterwrite in order to get a line edit for my novel, Champion’s Rising, the first in my Champion of Psykoria saga, so I can release a second edition with improved grammar and better overall language. At present a new cover is in progress, which should be revealed here on Betterwrite once it’s ready. I hope to have the second edition finished sometime before the summer ends. Until then, the first edition will remain on sale. Betterwrite, along with some other editors I’ve been in touch with, have assured me my writing in the previous edition isn’t as faulty as I’d been led to believe. 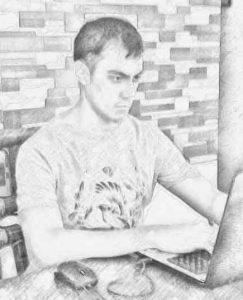 Tell us about your writing.
I’ve created a fantasy world that, quite frankly, has a place for almost every creature in mythology somehow or someway. Champion of Psykoria covers the events of a fierce war between the land of Psykoria and the daemons, with Champion’s Rising being a somewhat introductory tale. I like to keep my action intense, and focus much on the details, thoughts, decisions and developments made in the fight scenes. While Champion of Psykoria is my current big project, I’ll be releasing a smaller standalone series, as well as a slower-progressing comic series, on my website, all set in the same world. These other stories will cover various histories and tales loosely connected to Champion of Psykoria, and even other sagas I have planned, once the first one is finished. At present, I have one novelette, The Dragons’ Will, telling the early story of Darkus, a supporting character seen near the end of Champion’s Rising, and The Great Taelon Laskar, a four-part comic series which has just recently concluded. A complete edition for the latter will be available next month. Both are free to download on my website: http://bladeorflame.com

What writing are you doing at the moment?
As far as Champion’s Rising goes, I’m currently in waiting while the new cover is being made. This aside, I’ve otherwise finished formatting them. I’m going to try to make the map art I have more viable for e-book formats (at present, they’re exclusive to print and PDF), but this aside, I’ve got half of a novelette (or possibly novella) written for a back-story about King Breetor’s venture into the land of the beasts, a story summarized in Champion’s Rising. If I’m able to finish formatting before the cover is ready, I intend to continue working on it. At the same time, my comic artist carries my drafts for a new comic series, which continues where The Great Taelon Laskar left off. I can’t say when I expect this to be ready though; it’ll mostly depend on when my artist is available to work on it.

What do you like about your work?
Perhaps one of my favourite things about my work is how this world I’ve created gives me the freedom to use my imagination in any way I want. I also love the way things seem to flow together sometimes, such as when I have a plan to have one character develop certain traits, and realise another character has developed different ones, keeping the relationships and personalities dynamic. I always try to ensure that no two major characters are too similar, whether in appearance, personality, or even fighting style.

What don’t you like?
Most things I didn’t like about my own work I would’ve removed before publishing, but out of what’s left, if I had to name anything, perhaps it’s the loose ends my stories leave behind. Don’t be mistaken: I don’t do it by accident, because I do have plans for these unfinished plots, but the fact that I have to do one novel at a time before I can cover them all might so concern an author that readers may run out of patience. Rest assured, all loose ends will be addressed by the series’ end.

Have you got a personal bugbear?
Most of my bugbears have to do with anything that doesn’t allow me to finish any piece of work I’m doing, especially when I’m very focused. For someone who travels a lot, I often end up in places with power cuts and poor internet connection. I guess having these kick in when my ideas are pouring out rapidly at times when I need them can really get on my nerves.

What has pleased you in your work?
As previously mentioned, I’m happy with the dynamic variety of traits within each of my characters. I’m also very pleased with how all the back stories and histories described blend well with the overall setting, making the world very deeply imagined. I create my main plots before I create these back stories, only creating the latter when I realised there are holes that need to be filled. Overall, I’m happy to have created such a diverse world filled with so many fantastic creatures.

What didn’t please you?
Again, most of the things that didn’t please me, I would’ve removed. As far as Champion’s Rising goes, I always felt the entire story takes place over too short a period of time. In earlier drafts, the story took place in just less than two weeks, but I made it longer, to around one month, feeling the story would feel more epic. A part of me feels this is still too quick, but the characters don’t travel too far in this novel, which is why the timescale ended up like this. If I made things longer for this novel, some of the journeys I have planned for sequels would take excessive in-story time, which I feel would be unacceptable. In the end, I felt it was better to have the first novel taking place within a single month.

What amused you?
I guess if I found anything amusing about my own works, perhaps it’s in the more light-hearted scenes where the characters interact, especially in the introduction of more upbeat characters, such as Serenity Brakor (Champion’s Rising) and Taelon’s three apprentices (The Great Taelon Laskar).

Whose writing do you enjoy?
I’m a fan of Terry Goodkind, Gail Z. Martin, and George R.R. Martin. Tolkien as well, of course; his stories will always have a kind of aura to them, with him being such a pioneer of the fantasy genre.

Favourite title?
I think I mentioned this in another interview I did, but this isn’t an easy question for me to answer. I don’t exactly read a novel thinking “This is my favourite” or “I like this author’s book better than this other author’s book” or anything of the kind. Every author will have their own different style; I certainly like to think the same goes for me as well. I do, however, compare novels in the same series to one another, and often think whether I like the earlier parts of a saga better than the later ones.

That said, I find that if you read with this sort of mentality, you find yourself not having a single favourite book. To be honest, I’d probably give the same answer if asked what my favourite movie was!

What do you like about this author’s writing?
I’ve always liked how George R.R. Martin’s writing manages to be both dark and entertaining at the same time. As for Terry Goodkind, his writing always has me guessing the unique and creative ways his protagonists are going to end up foiling their enemies at the end of his novels.

Give us a quote.
There is some good in this world, and it’s worth fighting for.
— J.R.R. Tolkien, The Two Towers

What’s your favourite word in English?
This is definitely something that requires a lot of thinking to answer. I’m going to go with justice. Some may think it’s a cheesy answer, and perhaps it is, but it’s a deep word with a deep meaning, and if you think about it, the very concept of the word holds different meanings for different people. One person’s view of justice may be very different from another’s, and perhaps that’s why I find it such an interesting word, and an even more interesting concept.

Any other quotes?
When enough people make false promises, words stop meaning anything. Then there are no more answers, only better and better lies.
— Jon Snow, Game of Thrones Season 7

We’ve all got both light and dark inside us. What matters is the part we choose to act on. That’s who we really are.
— J.K. Rowling, Harry Potter and the Order of the Phoenix

Just remember who you are… The world will try to change you into someone else. Don’t let them. That’s the best advice anyone can give you.
— Cinda Williams, Chima, The Warrior Heir

And lastly, I’ll throw in one of my own:
It was much easier giving a compliment when there was only truth in it.
— S.F. Claymore, Champion’s Rising

Favourite saying?
The secret of getting ahead is getting started. – Mark Twain

Apart from your work, what plans or ambitions have you got?
I do have some aspirations to start my own business sometime in the near future, but what type of business will mostly depend on location, and who else will be involved (I don’t think I could do it alone). With a background in computing, there’s also a part of me that wants to publish indie video games, likewise set in the same world as my novels. However, I’m unsure if I have the time to manage it all, so priorities come first, and the novels will always take priority.

How will you do that?
As far as starting a business goes, the only major step is to find a suitable location, and only once I’ve done that will it become possible to decide what the business will be, due to what’s in demand in that location, competitors, etc. The idea of creating an indie game is something I’ll only start trying when I reach a point where I have enough time apart from my other priorities. 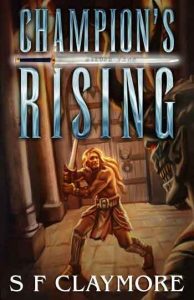 What have you learned about people?
To simply say people is too vague. If there’s anything I’ve learned about people, it’s that no two of us are the same. Some can be fickle, while others can be a great joy. Some can be both, or anywhere in between. There’s just too much diversity for people to be thought of as all the same. But if we were all exactly the same, wouldn’t the world be such a boring place?

Tell us something quirky about yourself.
Too many to list, honestly. I’m quite an adrenaline junkie, so I often appear a bit mad to others in such situations, though much less so now than years prior.

Finish with a story, true or false, with beginning, middle and end, up to 30, 60 or 120 words:
His kin were not prey: far from it in fact. They were revered. But there were those mightier yet, so mighty that a war among them was destroying everything. Food was burnt in the flames of war, homes crushed in storms of fury. How would they survive?

This was not their war, yet death spread beyond those fighting. Friends and loved ones starved. Where there was once happiness, only sorrow remained.

It finally ended. The mighty hid in sorrow of what they’d caused. Hope and peace returned. Now the land must recover; that was why griffins lived in a land alongside dragons. No matter how long it takes, they will restore life to this land. (115)

(I really had trouble trying to fit this into 120 words, so I apologise if it comes out a bit choppy. For those who’ve read Champion’s Rising, this is an account from the viewpoint of a griffin in the Land of the Beasts where Breetor travelled in the past, recalling events during the war between the silver and black dragons.)