We’re introducing you to people who are part of the Betterwrite world.
Welcome to COLBOURNE MILLER.

Colbourne, what’s your connection with Betterwrite?
Betterwrite helped me with the editing of my novel Creaking Floorboards.

Tell us about your work.
I started writing Creaking Floorboards over ten years ago, then it took me five years to get it to print. Life intervened! However, with my fingers firmly crossed, I’m determined to publish the two follow-on instalments of The Trials and Tribulations of Ian Wills later this year. Ian Wills is a forthright man, a self-proclaimed ‘Ancient Briton’, a total Marmite character. Ian is navigating the rocky road through middle age, and he shares with the reader his most private reflections and brutally honest observations of the people and politics that make up his world. Ian wants to change his life, to sing, to live, to escape dull twenty-first-century suburban London.

What work are you doing at the moment?
I’ve been working on a fourth book, which can be read as the final instalment in the journey of Ian Wills, or as a standalone novel. Once the other two in the trilogy are published, of course.

What do you like about your work?
The freedom to escape.

What don’t you like?
The rewrites, the editing, the marketing, etc. 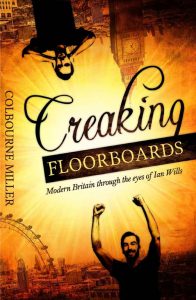 Have you got a personal bugbear?
Virtue-signalling.

What has pleased you in your work?
Sometimes I read it and I smile.

What doesn’t please you?
Other times I read it and I cringe!

What amuses you?
Everything.

Whose writing do you enjoy?
George Orwell.

What do you like about Orwell’s writing?
Whether he writes ‘fiction’ or ‘non-fiction’, he’s powerfully believable.

Favourite saying?
Thanks for sharing that!

Apart from your work, what plans or ambitions have you got?
To sing and play my guitar more, to produce my repertoire.

How will you do that?
The hard way, I should imagine.

What have you learned about life?
Don’t take yourself too seriously. Forget the struggles and embrace any success. Accept and love yourself, then give to others.

What have you learned about people?
Dogs are more honest.

Tell us something quirky about yourself.
That’s a tough one!

Thirty-five years of marriage had flown by, and Sam was fast approaching sixty.

Caroline called again: “Come on Sam, hurry up. They hate it when we’re late.”

Sam ran down the stairs, well, as much as he could with his dodgy hip. By the time he came to a halt he was face to face with his wife, her bright red lipstick practically smothering him, her overbearing perfume numbing his senses. He knew she knew! It was her eyes, that vengeful squint he knew so well.

Without warning, everything turned black: a large carving knife meting out its own justice through the arteries in Sam’s neck. (115)