We’re introducing you to people who are part of the Betterwrite world.  Welcome to ALISON BIRCH.

Alison, what’s your connection with Betterwrite?

I met Rob and a few of the other Betterwrite editors at a local group meeting of the CIEP in June 2019. We got chatting and he was kind enough to offer me my first copy-editing project for Betterwrite a couple of months later. 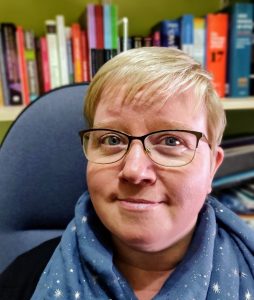 The French for sticking plaster is un pansement, and I will never forget it.

Tell us about your work.

I edit fiction, non-fiction and medical books for publishers, packagers and indie authors.

What are you working on at the moment?

A nursing textbook on mental health, a crime novel, and a self-help book.

After 27 years working for the NHS, I love the freedom and flexibility of being my own boss! And I’m always learning something new. My Google search history is … eclectic.

Formatting references, chasing unpaid invoices, and the lack of a pension scheme!

Have you got a personal bugbear?

What has pleased you in your work?

Getting positive feedback from indie authors who have trusted me with their precious manuscripts, not to mention their money. Having others see the value in what I do is a great feeling!

What didn’t please you?

Being approached for a ‘sample edit’ on a totally incoherent piece of work by someone I later found peddling plagiarised stories on social media. It was pretty obvious he hadn’t written them!

Editing novels for a friend and being able to identify some of his own unique personality quirks in the protagonist!

Whose writing do you enjoy?

Oh, too many! Margaret Atwood, Maggie O’Farrell, Hilary Mantel, Sebastian Barry; Jon McGregor is an absolute genius. But if I could only pick one, then it would have to be Douglas Adams.

The Hitchhiker’s Guide to the Galaxy, obviously. I love the juxtaposition of Arthur’s quintessential grumpy Britishness and Ford’s other-worldly nonchalance. And the Vogon poetry.

He had a fantastic ear for a funny turn of phrase or a punchline, and a brilliant understanding of the human condition which he wore very lightly.

Give us a quote.

“When the Drink button was pressed, [the NutriMatic machine] made an instant but highly detailed examination of the subject's taste buds, a spectroscopic analysis of the subject's metabolism and then sent tiny experimental signals down the neural pathways to the taste centers of the subject's brain to see what was likely to go down well. However, no one knew quite why it did this, because it invariably delivered a cupful of liquid that was almost, but not quite, entirely unlike tea.”

What’s your favourite word in English?

Any other quotes that are special for you?

(I once used this in a PowerPoint presentation at a job interview, shortly after I turned 35. I got the job.)

If you do something, something will happen.

Apart from your work, what plans or ambitions have you got?

To have a tidy house. That’s a pretty ambitious life goal when you have a small child.

How will you do that?

Lend the small child out to someone else?

What have you learned about life?

That, if you have a choice, there’s no point in filling the days of the only life you have with things that make you miserable.

What have you learned about people?

That, no matter how hard I try, I will never understand some of them.

Tell us something quirky about yourself.

I once sang Mozart’s Requiem at the Royal Albert Hall, sitting directly behind the Duchess of Kent in the first sopranos. She didn’t recognise me.

My husband and I went up the Montparnasse Tower in Paris. As we got in the lift, I ripped my fingernail adjusting my bag on my shoulder, and it started bleeding.

By the 56th floor, I definitely needed to do something about it, but we had no sticking plasters.

I approached the security man, but I didn’t know the French. Un Band-Aid, peut-être?

A bewildered – and entirely stereotypical – shrug.

I waved my poorly finger at him.

The French for sticking plaster is un pansement, and I will never forget it. (119)